"Fendi" such as around the world brand, company, unique bear type block type figure "BE @ RBRICK" and which is known in collaboration with artists, such as action figures to fabricate realistic to the extreme "REAL ACTION HEROES", a wide range of TOY the world send Medicom Toy. Spent from his childhood in Shibuya, now it was also interviewed commitment to Shibuya to Tatsuhiko Akashi headquartered in Uehara.

- Is Akashi and Mr. Shibuya of the encounter from time?

I was originally born in Minato-ku, but had lived far from his childhood was the Shibuya. Several times change schools has also been, but was the first to contain Sendagaya elementary school. If think so, (Shibuya) I think that I'm my home town. Because such and say the town of toy Taito is the main, to the wholesaler's, you or is said, "What do you do in Shibuya?". Perhaps, because I like really he Shibuya, you might not want to move from here. In memory of Hearing from parents, from the made kiddie lands in Harajuku, a love like the other really Kiddy Land (laughs) .... It seems to have been always saying, "should take".

- Whether the Shibuya of the landscape at that time, was different considerably and now? 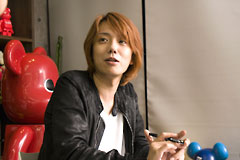 It really now is often very person in the image, a terribly I various are cultural feel that the Do it enters mixed town was, but in the culture even if in that time the fashion, of really the tip it was there are images, such as a square we only had. It is of course a fashionable town even now, but there was not the impression you are about various culture is mixed now. Rather, at the time, when one of the edgy culture come out, the image of Shibuya there is as saucer that will accept it. Really Shibuya, but it is Minato-ku. Whereas Minato Ward began to grow more and more High Society direction, Shibuya has very omnivorous manner began to incorporate a lot of culture ... such an image.

- Or even from about discretion, I had gone to play in Shibuya.

Hey I went. Really I had to go dizzy from childhood. It was also was a favorite Toka clothes, I wanted to go to also see the movie, but I have no other Tokyu Bunka Kaikan, was also love over there planetarium. It was Shibuya or Shinjuku If you watch a movie, Shinjuku been told useless went, Well, to go to Shibuya. Hamburger in just can McDonald's also had been eating. If you now, childhood, Shibuya was the town to go to the very stretch. Stated differently, and Do was a town that is allowed even if the stretch. I'm sure even now, a child who has come to Shibuya think so I think that a lot.

- Something like a memory of childhood, or tied to a base in Shibuya?

But it is definitely there do I commitment to Shibuya. For example, now the headquarters of the building, but I know Shibuya Uehara 2-chome, it is across the street, Meguro-ku, Komaba 5-chome. I feel like there was, Shibuya-ku Do not like a ... the neighborhood is good Uehara. This building, I Mitsuhiro Matsuda Nicole that passed away during this period was a building that had been owned. However, I think that would not have bought you were the other side of the street. (Shibuya) is really because Do's town make me seem proud of themselves located in their own. Shibuya is often referred to as the outgoing base of culture and fashion, but For me there is no country, here I think I'm a servant of the countryside. Here you can settle most.

- The circumstances that launched the Medicom Toy? 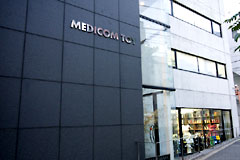 I originally had the company of the computer, but you've never done something work of the computer, to the movement, such as the interpreter stood between the programmer and the client, had to work like producer. At that time, in the few leisure time, whether something the United States of toys not it interesting, I had to take me to an acquaintance to store called "zap" that was in the fire street. Toka Do you have such a culture, I think adults Do I say to buy a toy, but it is from that time. For some time from there, it is the first to give zap was tribute terribly (laughs). Adults I say also bought a toy, adults were taught to zap's the fact that I'm also good fun with toys. Since the original study skin or rather scholar skin, beginning to think much you were my Toka Do to do this is you do not do this here, Toka wonder if not it cool idea to do more this ... kind of thing according to gather to buy, not you say if you make it yourself I I I thought it was not. So, at the time of the president while are in the computer company, was direct appeal me, "Let's make the business part of the toy."

- Direct appeal to the president?

The first was told, "What are you saying, you". Once I got to frustration, Shokori also no, because the company does not bother to you were, was the story that let me do the toy shop of American import, in my personal. For it lent the money, and I said that I do not know the reason (laughs) .... So at that time, it was to open the shop of breadth of tatami mat 3 minutes to Ebisu. Is a restaurant called "flip-flop". It this was the beginning. At the time, the store you are dealing only American toys, and zap and a flip-flop, there was only about 1, 2 hotels Atomo. At that time, the sons of the network that you want a toy there was a while finished by little. Still, it is the era of the net also nothing environment. A child who was in and out around that time will or has become a central member of one of the now.

- Still it is Waraji state of still bipedal. 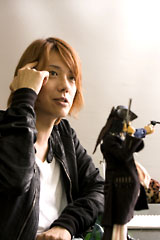 That's right. But had been for a while wearing straw sandals of bipedal, "because it begins the business of music, you Tetsudae" from the president and was told the ... of music work I was thought that I do not want to do too much. Music itself is not hate, but ... Well, President, instead, begged, "Do not let me do the business of the useless and saying toys before, but it does not apologize for the inconvenience to the company", I was asked to make a division of the toy. A result, at that time, while doing the work of the computer, and the support of the music business, while doing the business part of the toy, was wearing a quadruped of straw sandals that are doing a toy store in Ebisu (laughs). Really, it was a mess. And, when I passed about a year, he was called to the president. What "really I would not want to only work of a toy." Once you say "Yes, that's right", it is said that the "stock Toka Toka mold in the company, I quit When was I are willing to shoulder their own" ... and, as a result, become a form that was spun off independent year. Of course I wanted was to, gonna be entrepreneurs,'ll be independent, did not have the attitude like that'll do absolutely. It was felt that rather compelled by forces beyond one's control. I'm I'm not unplug hand separately from other work. However, would be seen because after all passion and potential of the work. "I music of the work is done it properly hard, the work of the toys you, will you be doing at 150 percent of the power," because, I do look after all (laughs).

- It is more and more independent.

12 years in this year independent in 1996, has entered the 13th year since the past June. Start with five people, I did not bother to completely fail. It was also history that had begun to work with already a variety of business partners, balance of payments also because we knew a certain skin, began from or Ikeru by Kuwase rice Once was about five Do not like a place. Immediately after the head office was able, because I also tiny, anyway from neat place called want to show their place of goods all, on the second floor of a little multi-tenant building went to the side of the front of the Tokyu Hands, figure shop "1/6 the first store of the plan "was opened in the breadth of Yojohan. However, 1/6 planning guess is growth was early. After doing there in one year, I moved to find a good property in the street near now of Tokyu department store head office. 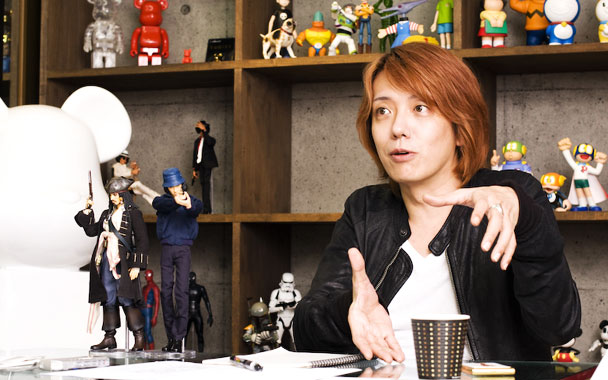 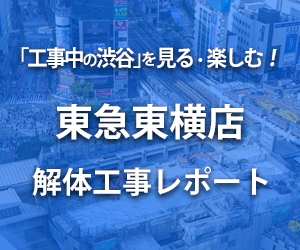