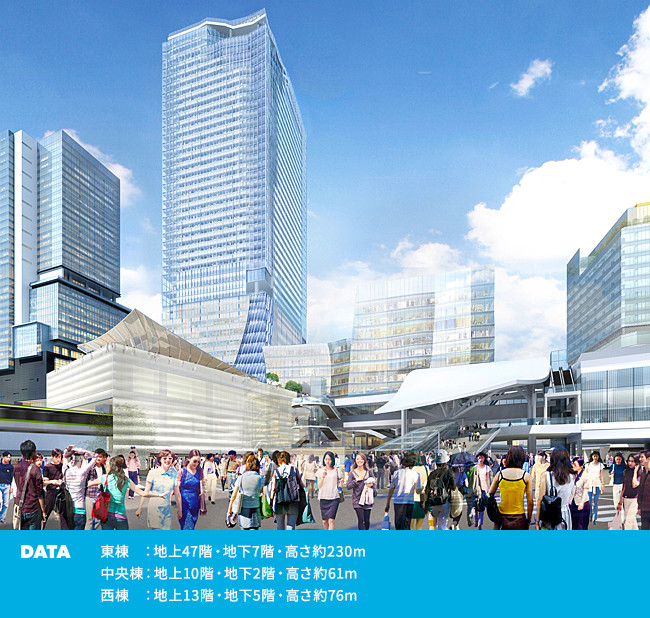 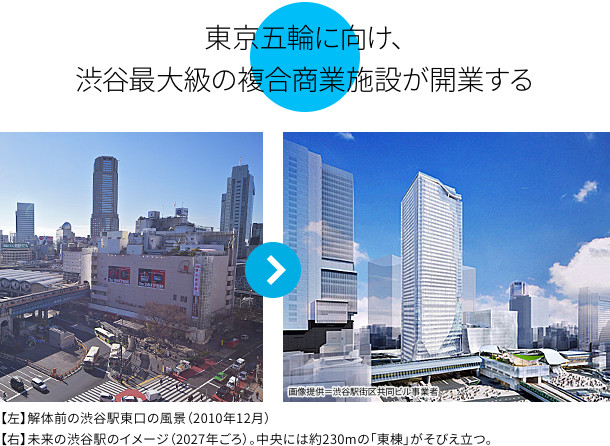 The “Shibuya Station Block Project” plans to rebuild the entire commercial facilities such as Tokyu Department Store East Building, West Building and South Building directly connected to the stations of JR Shibuya Station and the former Toyoko Line Shibuya Station. Three high-rise and high-rise buildings (East, Central, and West buildings) will be rebuilt in stages by 2027, and all entrances to be "the face of Shibuya" will be renewed. By 2020, the year of the Olympics, it is decided that one of the buildings and the east wing (approximately 230 m high), which will be a new landmark for Shibuya Station, will be opened in advance (central wing, The west wing is scheduled to open in 2027). By the way, the east wing is about 50 m higher than Cerulean Tower (about 184 m) and Shibuya Hikarie (about 183 m), and the largest commercial facility in Shibuya is born. It will no doubt be a facility that attracts people from all over the world visiting Japan at the Olympics. 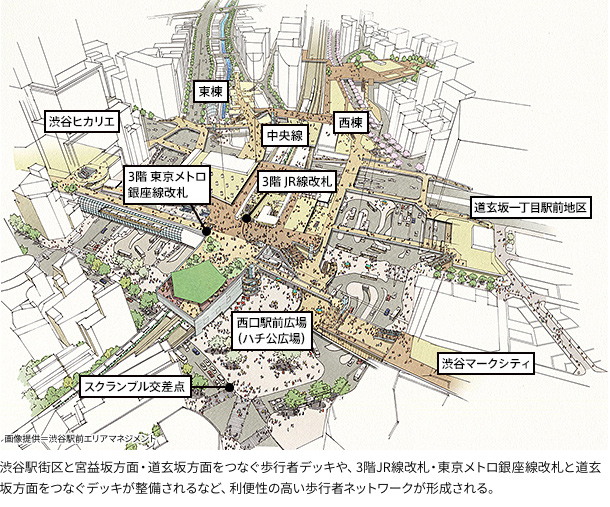 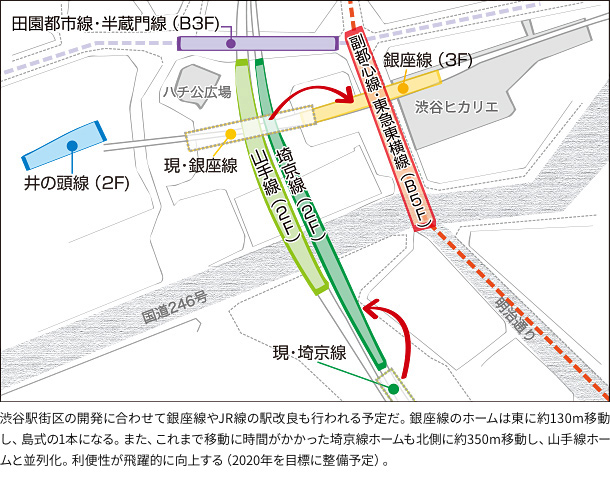 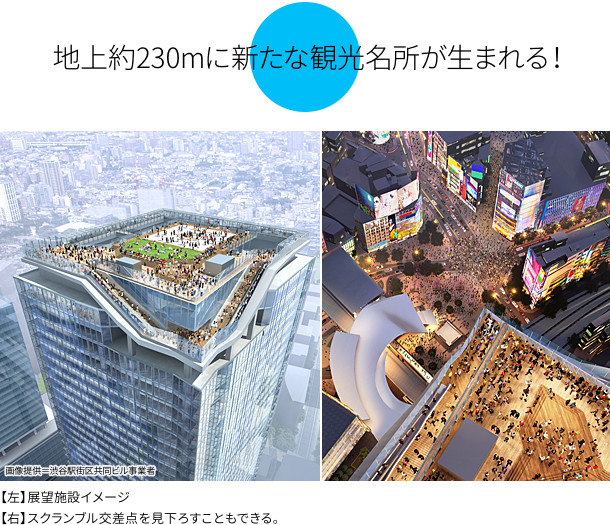 Another thing to notice in the East Building. It is an observation facility consisting of the top, outdoor and indoor. The view from Koichi Shibuya 's height (about 230 m above the ground) spreads out a wonderful panorama including Shinjuku skyscrapers in the back of Yoyogi Park, Roppongi and downtown area, and further to the west side Mt. Fuji. I am looking forward to seeing "scrambled intersection" which is said to be the most popular in the world, as a "tourist attraction in Shibuya" where you can experience Shibuya's dynamism. Although Shibuya already known as a tourist city, such as Shogunya Hachiko Statue and Shibuya Scrambled Intersection, Shibuya Scrambled Intersection, and Shibuya Scrambled Intersection, are newly added as a viewing spot on the station, it seems to be a device that increases the entertainment of Shibuya more and more. 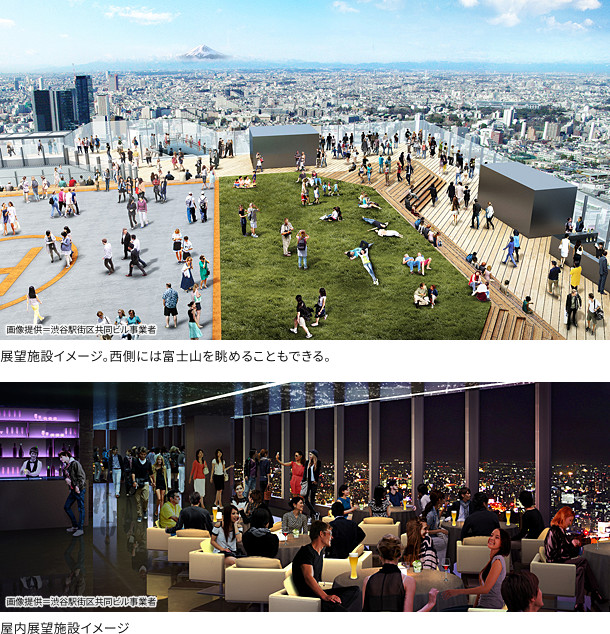 At the same time, the passage of the station and the station square will be renewed. Expand the free passage on the east exit ( Shibuya Hikarie side) and the Hachiko open space side while going around while avoiding crowds. Highly convenient, such as a deck connecting Shibuya Station Block and Miyamasuzaka area and Dogenzaka area, and a deck connecting the 3rd floor JR line ticket gate and GINZA LINE ticket gate and Dogenzaka area using a landform like a landform A pedestrian network is formed. Furthermore, in the east wing, as with Shibuya Hikarie , "Arb Core", a cylindrical blowout space, is placed. The Urban Core, which guides vertical movement of people from the underground Toyoko Line and FUKU-TOSHIN LINE Shibuya Station to the ground and upper floors, connects the top and bottom by elevators and escalators, and a multi-layered pedestrian network is expanded. In particular, Shibuya Station located in the valley bottom of the Suburbs terrain is not a gentle move for pedestrians from underground to the ground, from the ground to Sakagami. Simple and smooth maintenance of vertical movement plays a major role in reducing pedestrian stress. Another point is that the conventional Shibuya station had a very small capacity, people were overflowing, and heavy traffic always continued. By constructing the passage around the station in a three-dimensional way, there is also the advantage that you can gain more capacity than ever before. Urban Core will be the most important factor to create a smooth and smooth flow of people amid the Tokyo Olympics and an increase in people's visits. 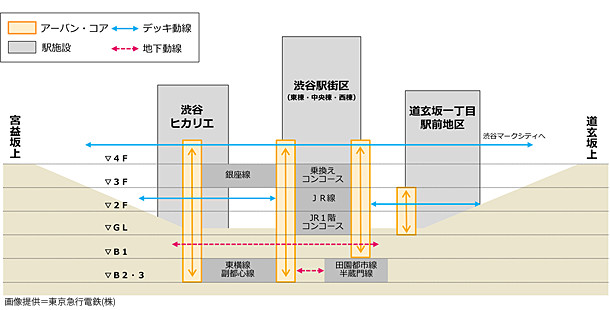 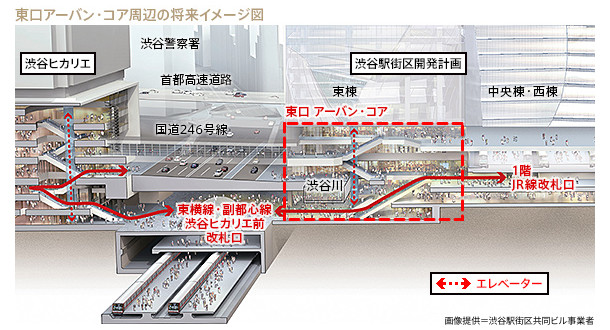